Home » General » Did the Spanking in School Make Us better Ugandan Citizens?

Did the Spanking in School Make Us better Ugandan Citizens? 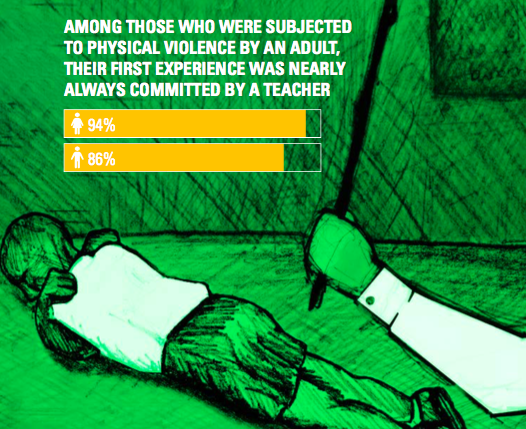 I recently run a poll on Twitter, my question was, “were you beaten at school?” Only 92% of the 73 people that responded had been beaten at school for all sorts of reason, they shared their experiences;

In my school, kids were beaten for:
*Failed to attain a certain grade
*Questioned the teacher
the teacher to a parent for unnecessary punishment
*Late for class
*Not being articulate
*Poor handwriting
*Creased uniforms
*Almost anything that angered the teacher. https://t.co/G5sBu2VcXk

1) Mr Muliro Randomly Beat Us While Singing “Fire Fire…” Whenever He Wore Red Shoes.
2) Mrs Oryema Left A stick On My Desk Because She Knew I Was Going To Fail Maths.
3) One Teacher Wanted To Give Me The Kiboko He Owed My Elder Brother, Who’d Left 5yrs Prior.#EndViolence https://t.co/4ai7hVkhPN

Did the beating make us better people or did it birth angry people or were we subdued to a culture of silence that makes us crouch down in fear in the presence of those that hold authority.

A study from Michael Mackenzie of Columbia University indicated that spanking at age 5 was associated with greater aggression.

Studies show that the use of corporal punishment is associated with increased mental health problems in children including increased psychological distress, which may lead to anxiety, depression, alcohol and drug use, and general psychological maladjustment in those to whom it is applied.

A recent survey conducted by the Ministry of Gender Labour and social development indicates that,

Unfortunately, this vice has been normalised. There was a common saying when we were in school, that an African Child’s ears are in the buttocks. What is the origin of this saying? I wonder.

Evelyn Masaba breaks it down for me;

I think it was something to got from the colonial masters about handling black children, when you see how they handle white kids its different.

I agree with this assertion in many ways; the school system we are attending, was by colonialists so the relationship between the teachers and the learners was a master- subject relationship. 50 years on, most teachers don’t seem to know any other way to discipline kids.

My mind is connecting dots right now – currently, there are high cases of Violence against women in Uganda- is this violence a byproduct of the violence that Ugandan kids faced while growing up?

Could this be a case of displaced aggression? According to Bushman a Psychologist, displaced aggression can occur when someone cannot aggress towards the source of incitement or provocation, so instead takes it out on something else and behaves aggressively towards another individual that had nothing to do with the initial conflict. Most of the victims are those whom the aggressor considers weak- women, children or pets.

I guess the time to take action is now – The Ministry of Education after this survey has to roll up its sleeves to train teachers in better ways to discipline children- because what is called disciplining right now is partly to blame for creating angry and subdued citizens.