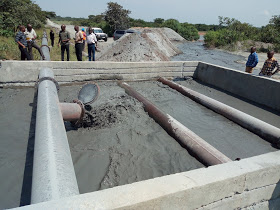 Officials from Ministry of Mines inspecting the effluent

It was a struggle to open the huge pipe.

Two men had to help each other to release the effluent from this pipe.

The tailings flow on the ground, through a foot path into a dam.

This dam, which was built by Mopani Copper Mines, a subsidiary of Carlista Investments Corporation which is a joint venture between Glencore and First Quantum Minerals.

This dam also has an opening which later releases the effluent into the nearby bush.

Unfortunately, this tailings dam is illegal according to the Kitwe-based Mine Safety Department, a unit of Zambia’s Ministry of Mines which oversees safety issues in the mining industry.

“There is no indication from the Mine Safety Department that this paddock was approved. Mopani Copper Mines did not apply for it to be set up here. This is not good for the environment, there is a nearby stream and am sure it is being polluted,” said Gideon Ndalama, the National Coordinator of the Zambia Mining Environmental Remediation and Improvement Project.“This is very bad and dangerous. You cannot be harming the environment like this. I will talk to management, they need to stop this. There could be acid and uranium here being discharged into the environment,” said Paul Chanda, the Permanent Secretary in the Ministry of Mines.

Authorities are not happy that Mopani Copper Mines is discharging the waste without notifying relevant authorities.

Mr Chanda, who made an unannounced trip to the Nkana Tailings Complex, was shocked to find workers from Mopani Copper Mines opening one of the pipes to discharge the tailings.

He threatened that Mopani Copper Mines risks being penalized for deliberately harming the environment.

The workers on site could however not talk to this blogger as to why they were discharging the effluent.

Efforts to get a comment from Mopani Copper Mines proved futile as a press query sent to the firm’s Public Relations Unit was not responded two for a week.

However, inspectors from the Zambia Environmental Management Agency (ZEMA) have visited the area and collected samples to ascertain the contents of the effluent.

ZEMA Corporate Affairs Manager Irene Chipili says the samples have been taken to a laboratory and they will be tested soon.

A check at the nearby tailings found some trees and grass drying up due to lack of maintenance.

The tailings, whose licenses have been given to private firms, have developed craters and holes, leading to the leakage of red oxide to the environment.

The Ministry of Mines has since asked the license holders to fence off the tailings to stop the leakage of red oxide which is harming the environment.