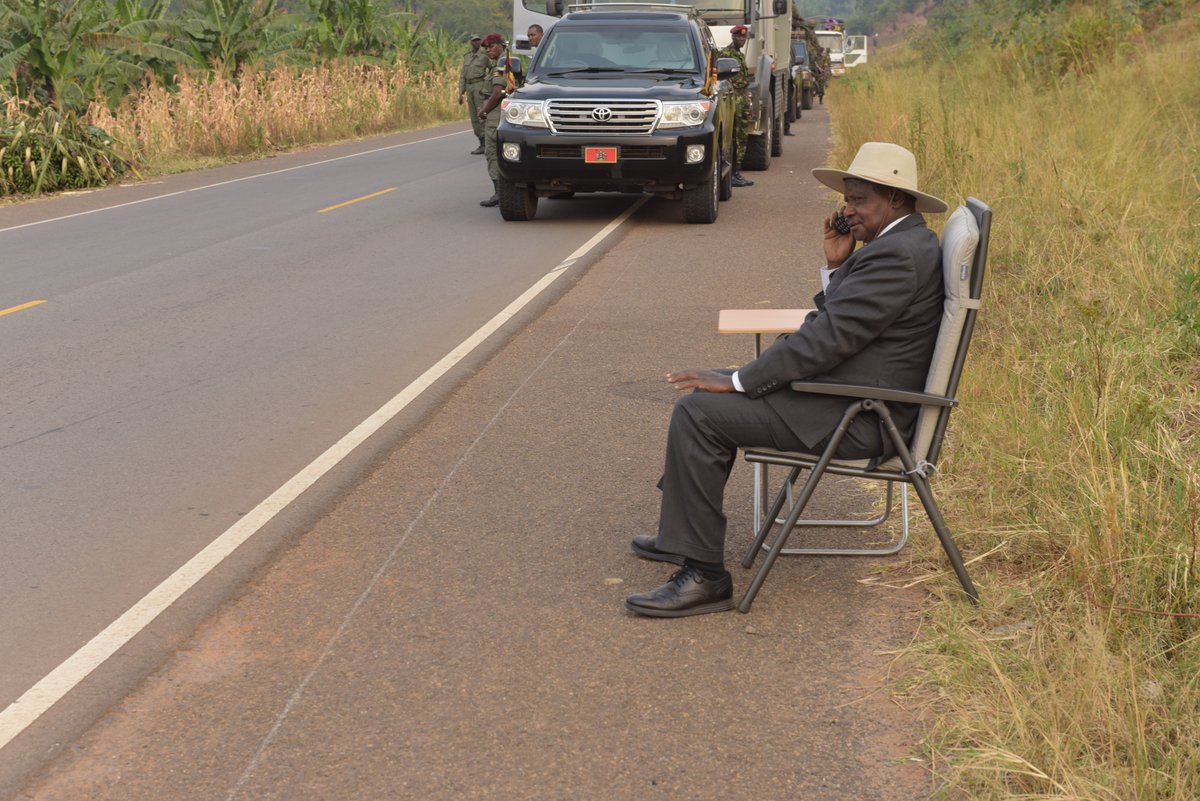 Freedom of expression is a lot of things – and for this digital savvy age: cartoons and memes have become a crucial part communicating online.

If you don’t already know : a meme is defined as : “a humorous image, video, piece of text, etc. that is copied (often with slight variations) and spread rapidly by Internet users.”

On Tuesday, 11:28am one of President Yoweri Museveni’s Press team members posted a picture of him taking a phone call by the road side. The picture had been taken the day before. That wouldn’t be  problem – but I think the reason as to why we paid attention to it was the fact that he had his chair put out by the road side and he sat. What we didn’t see was his usual flask of milk or tea or whatever his poison is.

Within minutes the memes had started. Very hilarious way to vent if you ask me.  They included :

I proclaim Yoweri of the house Museveni,1st of his name, King of the Ankole, protector of the realm.#M7Challenge pic.twitter.com/wepFgSks1F

This meme has just killed it. Happiness is killing me #M7Challenge pic.twitter.com/w93v8kQ4sw

"Haters are going to say it's photoshop"

Someone even came up with a “Starter Pack” for what became the #M7Challenge  for those that wanted to take part in the challenge.

Some people actually did take on the challenge.

"Yes, am signing out. Will be home in 2 mins!"
Thank you for tuning in to #NTVTonight. Goodnight. #M7Challenge pic.twitter.com/NeFhKT8oQO

The Kenyans have taken it a little more serious than we the Ugandans:

The reason for the picture also became subject to a lot of debate. There were speculation as to why it was sent out – with some saying that it was deliberate. The major assumption was that the President’s PR team released it as a way to distract online folks about the release of the Opposition leader Dr Col. Kizza Besigye. The subject of the phone call was also debated upon.  Was he ordering the release of the main opposition leader [which happened the next day] or  was it about the South Sudan current crisis? All these seemed ‘credible’ reasons.

Whatever the reason –  whether intended or not – this was good. As they say – there is no such thing as bad publicity. The story has been carried by CNN, BBC, BuzzFeed , The Guardian among others. This also shows how welcome social media has become in Uganda and how it has become a part of our everyday lives. Seeing as Uganda for some reason has so much pessimism going round – I must say that I had a good laugh. This was definitely good therapy and it still is.