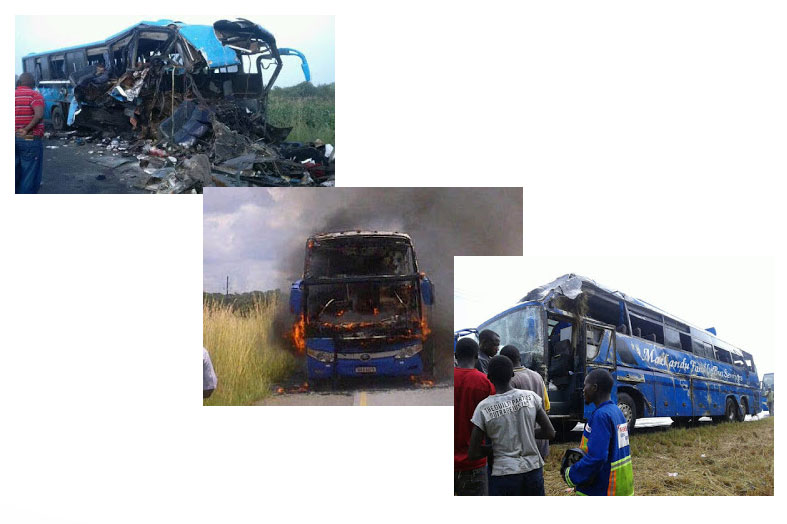 Mazhandu Family Bus Services, a popular coach service in Zambia, faces a ban over a spate of road accidents that have claimed lives and injured dozens of people over the last 12 months. The company, which is owned by the wealthy Mazhandu family, runs coaches to several towns across Zambia.

Mazhandu coaches prides itself with time keeping as well as free drinks and snacks on board. In recent months, the company has procured several Chinese-made higer buses for its increasing fleet which is one of the largest long haul coach service in the country.

However, in the past year, several of their buses have found themselves in accidents which has cost lives and left dozens injured. The latest being on Monday when a Mazhandu coach lost control while negotiating a curve in Kapiri Mposhi, a town in central Zambia.

That accident left seven people dead and 51 injured. Among those who died was a lady Nenanji Silengo who was returning from her kitchen party in the mining town of Chingola and died five days before her wedding which was scheduled for this Saturday.

Her death has caused mixed reactions from Zambians on social media as people shared her photos from the kitchen party.

Subsequently, the regulator of transport in Zambia the Road Transport and Safety Agency(RTSA) has given Mazhandu Bus Services a seven day ultimatum to show cause why the company’s Road Service Licence should not be revoked or suspended for its ‘bad’ safety record.

According to RTSA Chief Executive Officer Zindaba Soko, the agency is concerned that the record of operation for Mazhandu Family Bus Services has increasingly detoriated from 2013.

“The Agency has a responsibility of ensuring the safety of all road users and will in this regard not hesitate to invoke its powers under section 108 of the Act either to suspend or to revoke the Road Service Licence of any operator that has a bad road safety record.”

On 16th February 2015, another Mazhandu bus registration number ACZ4562, overturned at Kasongo area near Luanshya turn off on the Ndola-Kitwe dual carriageway with 16 people aboard and one person died on the spot with some sustaining injuries due to speeding by the driver.

The records further show that on 29th February 2016, a Mazhandu bus registration number ABK 8288 was involved in a road accident around 06:00 hours along Nakatindi road from Sesheke to Lusaka where one person died on the spot.

“Investigations into the cause of the crash involving your fleet of buses revealed that all crashes occurred after the drivers lost control due to excessive speed leading to such accidents. Over speeding is an offence under the Road Traffic Act No. 11 of 2002 and the Agency notes with concern that there is a growing tendency among public service vehicle drivers to drive at excessive speeds hence endangering the lives of the travelling public,” he stated.

He further pointed out thus:

“You have a duty as an operator to instruct your drivers to observe all traffic rules whilst they drive your vehicles because any violations of the law on their part reflects on you as the principal and go a long way in informing the Agency on the caliber of drivers that you recruit to help you in your business.”

The Act provides as follows;

108 (16): “A Road Service Licence may be revoked or suspended in whole or in part or its terms or conditions may be varied by the Director on the ground that any condition subject to which the licence or a variation was granted has not been complied with.”

Mazhandu Family Bus Services is yet to respond to the ultimatum.