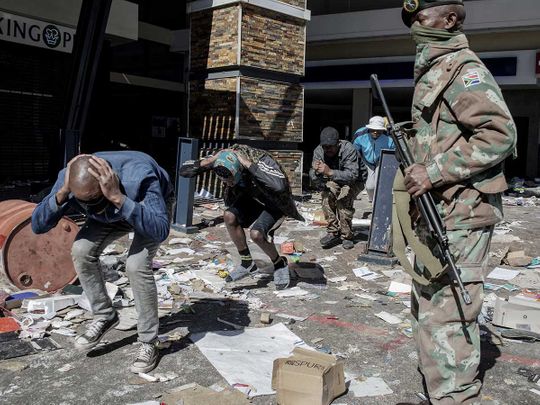 The AU Commission Chairperson Moussa Faki Mahamat has called for the restoration of order in South Africa following days of riots. According to information released by police on Tuesday (13th July 2020), 72 people lost their lives in the protests which were characterized by indiscriminate looting of malls and businesses in Gauteng and KwaZulu-Natal provinces.

The riots were sparked following the arrest of former president Jacob Zuma on Wednesday last week.  A South African court had handed him a 15-month jail term for failing to appear before a commission of inquiry into alleged corrupt dealings during his administration.

Faki says the unrest in South Africa if untamed will likely spread into other countries. “The chairperson calls for [the] urgent restoration of order, peace and stability in the country in full respect of the rule of law. He stresses that failure to do so can have grave impacts not only in the country but the region as a whole,” read part of a statement from his office.

The South African government is accusing factions within Mr Zuma’s past administration of instigating the unrest to create a popular revolt. During a security cluster briefing attended by ministers in charge of security and intelligence, and top army and police commanders, the government indicated that they are investigating about 12 people in connection with the chaos.

While looting has continued in several parts of the two provinces, there were scenes on Wednesday of community members standing up to defend some of the businesses in their neighbourhoods. Some 1,200 have so far been arrested for participating in the looting.

Residents of Soweto have formed a human wall in front of the #MaponyaMall. They say it is the closest place where they are able to get all the basic necessities and they have vowed not to allow any #looting to take place. #SABCNEWS pic.twitter.com/ZbLpYff4WH

The current crisis comes in the background of a level four lockdown as the country battles with the third wave of the Covid-19 pandemic.