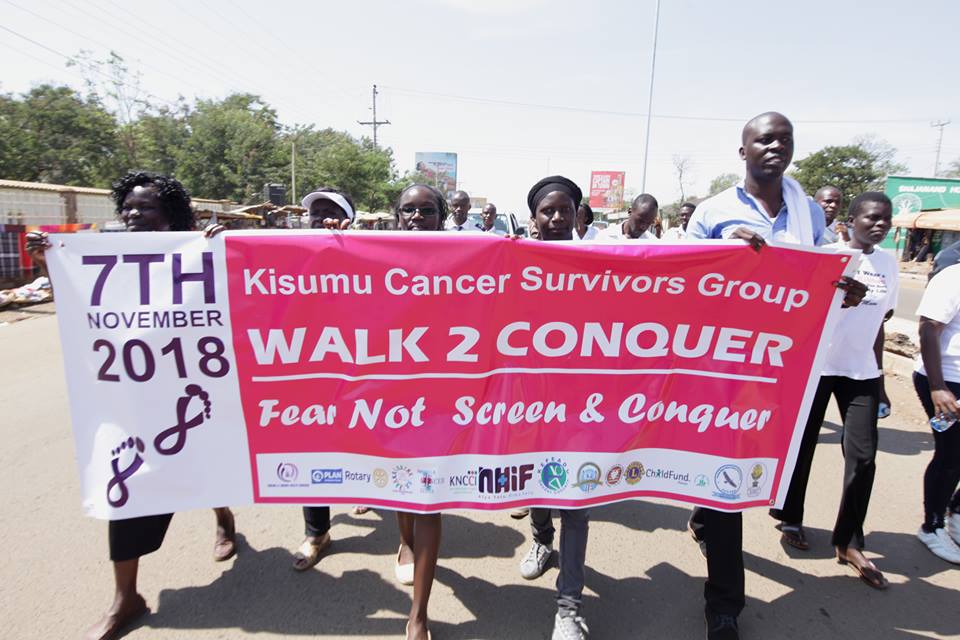 The doctors told my dad to take me home and make me comfortable. There was nothing else they could do, I had about 14 days to live. I had gone to the hospital able to walk on my own but now I had to be wheeled out in wheelchair – the death sentence from the doctors has sucked life out of me.

Those are the words of 17 year-old Winnie Rukia. She is describing a moment from 4 years ago when a doctor at Moi Teaching and Referral Hospital had given her dad a status report of her high grade sarcoma – a fast growing tumor on her brain. She had pretended to be asleep but heard everything the doctor said to her dad. The countdown to the end of her life had began, 14 days is all she had and comfort was all the doctor could prescribe. This is the largest hospital in Western Kenya and the only public hospital offering cancer treatment at the time.

Her friends visited to encourage her, people from her mother’s church came to pray with her but she still remembers the nights she couldn’t sleep. How could she when 14 days is all she had left in this world? They were frightening she says.

Before she went to the hospital she had no idea she had been diagnosed with cancer. For about a month she had had itches on the right side of her scalp. As she scratched more it turned into a wound. Her dad who worked at a hospital took her there to get treatment, little did he know that his second-born daughter would be diagnosed with cancer. When the diagnosis came he had no idea of how to break the news to her daughter. He told her they had to go to a hospital in Eldoret for surgery but she had no idea it was because she had a tumor in her brain.

I met Winnie during the ‘Cancer Conquerors’ Walk’ in Kisumu, she and several other survivors marched through the streets of Kisumu city to create awareness on cancer, fight stigma and create publicity for a breast and cervical cancer screening that was being held at Kisumu Hospice and Palliative Care Center for the next two days.

Winnie removes a white hat she was wearing. The hat had concealed a healed scar on the right side of her head – the scar has a diameter of about five centimeters. We were having this interview in a shade outside the Kisumu Hospice and Palliative Care Center. The hospice is located inside the main referral hospital in Kisumu and for a long time was the only place cancer patients from Western Kenya could get subsidized chemotherapy and hormonal therapy for breast cancer survivors. To date there is no facility in Western Kenya offering radiotherapy.

It’s here that Winnie’s countdown to her time of death ended about four years ago. One morning when she just had six days left in her countdown her dad told her he needed to take her somewhere. They came to the hospice.

I remember it was a Tuesday morning. Dad told me we needed to try a form of treatment called chemotherapy. I was wheeled into a room and put on a drip. I started feeling much better after the first treatment. The six days I was waiting for passed, I was getting more energetic. On the day I was to die I started walking albeit with a little help, it was a miracle. People who did not expect me to get better thought I was putting on a last show. On the seventh day I was back to the hospice for my second session of chemo. When I went for the third session I went alone using public transport. People at the hospice could not believe it.

Winnie was too young to worry about the cost of her treatment. She just wanted to get better and get back to her journey of becoming a lawyer. She however knows that the treatment she received was very expensive. She says that as a lawyer she will earn enough money to donate some to cancer patients especially children from humble backgrounds.

Winnie is a member of Kisumu Cancer Support Group, the groups which was founded at Kisumu Hospice and Palliative Care Center plays a very important role when it comes to counseling of the patients. Here they come with various needs, others have had their diagnosis revealed to them in a shocking way, some are dealing with denial and several others are dealing with difficulties in financing their treatment.

At the hospice I also met Rita Opondo. Rita is a Secondary School teacher and an official of the Kisumu Cancer Support Group. She had a mastectomy operation about three years ago. She describes her journey in conquering breast cancer as “hectic.”

Hectic because at the point of her diagnosis, she had no idea how she would cater for her treatment. Her doctor prescribed a ‘radical’ treatment which involved eight sessions of chemotherapy and five sessions of radio therapy. She could get chemotherap at the hospice for Ksh. 15,000 (aprox USD 150) a session. Quite expensive for a public servant like Rita.

For radio therapy she needed to travel to Nairobi. Kenyatta National Hospital is the only public hospital offering radio therapy in Kenya. Being a national referral  hospital which also at times serves patients from other East African countries, congestion is a real issue.

I wanted to go for radio therapy but here in Nyanza there is none. I could have gone to Kenyatta (National Hospital) but when I thought of the queues and at times there were breakdowns of the (radio therapy) machines. At times I would be told to wait for one month and by that time the lump (in my breasts) seemed to be growing fast and I was worried. I knew the consequences (of not having this treatment fast enough).

She considered going for treatment at a Private Hospital in Nairobi, but she later realized she could not afford the treatment. Rita was lucky enough to find a doctor at Mulago Hospital in Uganda who could offer the same treatment at a more manageable cost. Ksh. 150,000 (aprox USD 1,500) was all she needed.

Radio therapy was not very successful, mastectomy was inevitable. Rita is grateful that the kind doctors at Mulago Hospital managed to do the operation to save her life despite not having enough money to cater for it.

Rita who was all smiley was now a bit emotional. Her narration of the process brought tears to her eyes.

She however wishes that the cost of treatment locally was manageable. She still regrets that she had to go to Uganda for a procedure that would have been done locally.

It feels bad. It’s actually a pity that we don’t support our patients as much. At the time I was getting my treatment I was really discouraged by the kind of service I got from our insurer. I went to AON Minet (the insurance service provider for public school teachers) and they told me they don’t cover cancer treatment. I cried. When I asked why they told me ‘it’s one of the new diseases.’

I went to NHIF (National Health Insurance Fund) and asked them what role they could play for me. They said that since we had deserted them to AON (AON Minet) they are not going to do anything for me. The person I was talking to was very rude. I cried. That was a painful moment.

Rita took a loan to facilitate her treatment. A loan she is not done paying. Her family also chipped in. She asks me what happens to people who don’t have government jobs and can’t access loans?

According to statistics from Kenya’s ministry of health, there are about 40,000 new cancer diagnosis every year. More than half of these patients die due to late diagnosis. Several others are driven to seek treatment outside the country due to congestion at the public hospitals that offer cancer treatment or the high cost of treatment in pprivate hospitals. India remains a favorite destination for thousands of these patients.

We are very grateful that India has opened up its facilities to our people and over 10,000 Kenyans are coming for various medical treatments.

President Kenyatta hopes that a lot more cancer patients can be saved if Indian doctors invested in health facilities in Kenya. His own government has however made little investment in cancer treatment despite the worrying figures of new diagnosis.

There exists an opportunity to expand that number from 10,000 to well over 100,000 by developing those facilities in Kenya. You would be able to triple your business and it’s beneficial to you and to us.

For now recovering patients like Winnie and Rita will continue marching on the streets every October, hoping to create much awareness about this disease that has robbed them of part of their bodies. Hoping and praying that such awareness would lead to having more responsive doctors who will go out of their way for their patients and a public health system that makes treatment of cancer and other terminal illnesses affordable for all Kenyans.

It is already painful enough to have this disease, we should not add the pain of not being able to afford treatment to it.