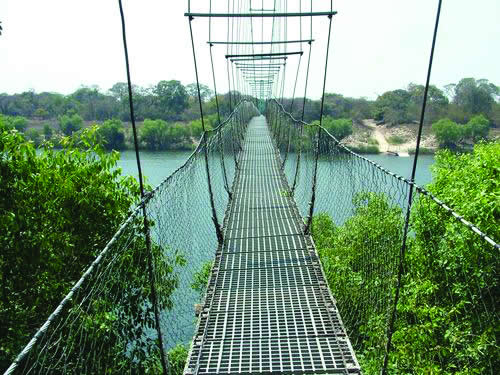 There are very few places in Zambia with such a spectacular view of the Zambezi River than Zambezi Town in the North Western province. The location of the town makes it an ideal tourist destination. Yet tribal rivalry has become the highlight of the town.

Zambezi River passes through Zambezi Town, divides it into two towns, which are also distinguished by language and culture. The west bank of the town is predominantly Luvale speaking while in the east bank people speak Lunda, there is an intense rivalry between the two divides such that its chiefs do not see eye-to-eye.

In the west resides Senior Chief Ndungu of the Luvales while on the east bank is Senior Chief Ishindi of the Lundas. Over the years, there has been problems with the dominance of these tribes on either side of the Zambezi.

These divisions have also entered the church, an unlikely place where most people would think tribalism can not be practiced or tolerated. The Catholic Church in the area is caught up in this dilemma. For example, Our Lady of Fatima Parish, which is located in the middle of town has resorted to holding separate services, one for Lundas and the other for Luvales.

Father Noel Haaninga oversees Zambezi District and he explains the challenges he goes through in bringing the two tribes together:

“I superintend over 29 churches in Zambezi and there are certain areas where certain songs from this other side of the tribe are not allowed to be sung in church and vice versa. Even at the boma church where I am based, you are able to see tension even on small issues like choosing church leaders, people would want to have their own to lead the church.”

Because of this tension in the church, Father Haaninga says he is forced to conduct two separate services for the two tribes as a way of accommodating both sides of the divide.

Schools have not been spared; there is still a division in the delivery of education services. According to the school curriculum in Zambia, each district is supposed to adopt one local language for pupils from Grade one to four. However, in this district pupils in the west bank are taught in Luvale, while in the east bank are taught in Lunda. In the town area where there is a high concentration of both tribes, English – neutral language, is the language of instruction in primary schools.

“I was the first District Commissioner under the Patriotic Front Government in 2011. We had found that the schools in Zambezi were being taught in three languages: on the east bank it is Lunda and English. On the west bank its Luvale and English. Thats the same process we are following upto today because thats what government has set up as zonal language,” said Zambezi District Commissioner, Lawrence Kayumba.

A few years ago before the policy of using separate languages was introduced, local media reported that one female teacher was assaulted by Grade One pupils when she taught them in a rival language which they termed offensive. This forced authorities in the town to close the school and classes only resumed after tensions were calmed following the zoning of the entire district into the three languages of instruction.

Rodgers Sakuwuka is a former Zambezi Member of Parliament and understands the challenges in this town. He shades more light on the history of this tribal tension which dates back to Zambia’s pre-independence era:

Sakuwuka however says there is need for both the Luvales and the Lundas to co-exist since they inhabit the same territory.

“Since you came to Zambezi, have you seen Lundas physically fighting the Luvales? Have you seen separate shops for Lundas and others for Luvales? All am saying is colleagues, lets avoid this issue of divide and rule. Lets avoid escalating the situation.”

Despite this tribal rivalry, Zambezi is a lively town. People go on with their normal lives under governance of one district.