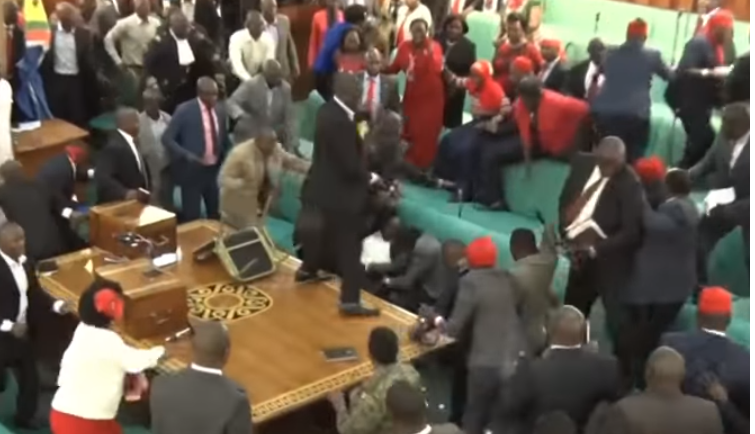 Those who love peace must learn to organise effectively as those who love war – Martin Luther King Jr March 25 1967.

A lot has been said about the current on goings in Uganda in regard to the Presidential #AgeLimit Debate. For awhile I wondered if my voice was at all important, seeing as we managed to get the whole world to pay attention to us. The brawl that happened in Parliament is despicable to say the least and that is my opinion.

I know that is being justified by the many – because it was a show of defiance by those in Opposition and so on and so forth. And while there are a number of Parliaments around the world that have engaged in similar fights – it still passes as unbecoming. Leaders can do better. Why – for example would you throw a chair at a colleague – how is that supposed to solve anything?

Something however– got me thinking.  24 Members of Parliament that were said to be uncouth during the first Age Limit Motion debate were suspended for 3 sittings. The next day – was when the brawl happened. But the day after,  the house came back the next day and the majority of Parliamentarians who belong to the ruling NRM, the motion was tabled in Parliament and debated, and the Speaker was applauded for suspending the Mps. Just like that. In the end according to them– they had won, they had scored and the opposition were losers.

Which brings me to uncomfortable conversation that we don’t want to have – but it’s a necessary one: The relationship between opposition to ruling parties in Africa. I say Africa – because this is a trend that I have noticed. How do the Opposition make their impact to be more than demonstrations and walkouts?

In Uganda, the reason as to why the motion was debated in the absence of the suspended members of parliament who mainly belong to the opposition is because the ruling party has the numbers. In Uganda’s Parliament as of May 2017, there were 447 MPs.  The ruling party NRM alone had 298 Mps which represents 70.8% of Parliament. The Forum for Democratic Change [FDC] had 36 Mps – 8.6%, Democratic Party had 15 – 3.6 %  and Uganda Peoples Congress had  6 Mps – 1.4%.  The independents were 66 which is 15.7%. Out of the 66 independent MPs – 43 are NRM leaning.  There have been election results petitioned and some MPs have lost seats and new elections have had to be held in some constituencies since May. This however doesn’t significantly alter the numbers and percentage representation in Parliament.

What this shows for me is that the ruling party could have with or without the suspended MPs been able to pass the motion because all that is need is 2/3 of eligible MPs to pass a motion. Only 12 out of 298 NRM MPs have publicly opposed the bill. But with the 43 independents that are NRM leaning – they did have the majority in Parliament. There also off course the 10 Army representatives that we are almost sure would vote along party lines – giving NRM the clout that they need.

Opposition needs to find new tactics to get a lot more MPs elected. Because that is what it is going to take to overhaul decisions made in Parliament and to make sure that they benefit the people.

According to Regan Wamajji who works with Parliament Watch– this is going to be a very ‘unpopular bill, that is going to be passed with popular numbers.’ Why? – because while the Speaker of Parliament has asked for consultations to be done – the only thing that can shift the tide is the kind of backlash that would result from the consultations. Especially if the majority of those opposed mobilize the masses to voice their opposition.

I think that for Opposition to be successful – organisation is key. And not just organising demonstrations and Twitter chats. Organising and supporting their own to have the numbers in key areas like Parliament. Because regardless of how much noise is made – if the ruling party has an upper hand in numbers. Numbers plus state resources mean that most opposition agendas don’t get to see the Light of Day.