Home » Governance » Populism, more than prejudice, is the problem with Trump

Populism, more than prejudice, is the problem with Trump 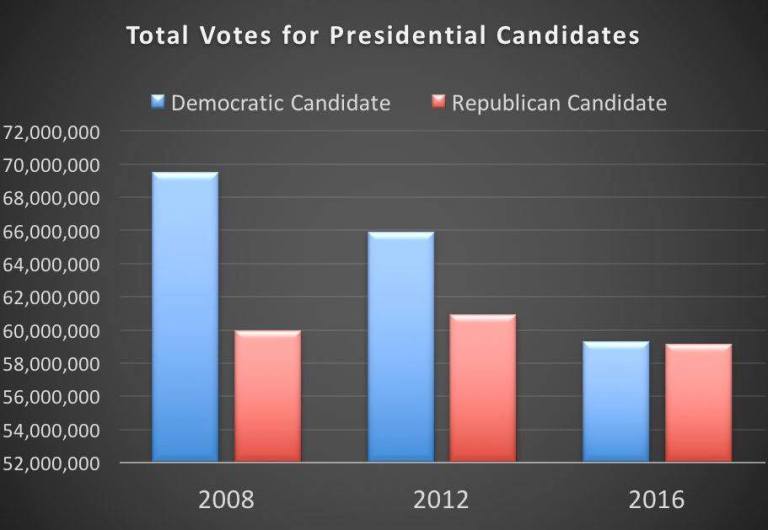 Oh, and, potentially, centrist politics – at least for a time. Brexit was at least in part a triumph of the political right, fueled by fears of immigrants and a nationalistic fervor, by contrast to the vision of a world united by common values and open (in both the legal and cultural senses) borders.

Trump’s victory in yesterday’s elections was similarly a rejection of business as usual, where voters in the USA (as per the Electoral College, though not popular majority) demanded something completely different to the “establishment” offering of Hilary Clinton, choosing to instead elect a candidate who has openly espoused xenophobia, sexism and Islamophobia.

University politics in South Africa are part of the same pattern. Not because student protests are motivated by the same noxious values, but because they also tell us that people are fed up with the status quo.

A general point worth making in response to all these cases is that – no matter where you stand on any of the particular issues involved – politicians, pollsters and media practitioners have underestimated the depths of disaffection so many people are experiencing.

As a friend said on Facebook, Trump was not a “triumph of the angry white right”, but a result of “liberal arrogance and apathy”.

This is what happens when one gets complacent. Not only complacent in the sense of not turning out to defend your values in a democratic election, but more importantly, complacent in assuming that everyone is roughly happy with human progress, and trusts in the narrative whereby the world is slowly getting richer and happier.

Because some people don’t feel like they are getting richer and happier, and they need someone to blame. Yes, there are racists and sexists and xenophobes in the camp, and those folks belong in the “basket of deplorables”. But there are also people who simply feel ignored and left behind, still working-class and still poor, after hearing decades of politicians promising them a better life.

It’s true that there are too many “low-information” voters, and also true that voters can and have been lied to. The question we need to attend to, though, is how to fix this given that we know the usual methods aren’t working.

There was no shortage of media coverage of Trump’s failings, nor of the negative implications of Brexit. But these were the voices and opinions of “experts” – the same experts who have (according to populist perception) been selling us a false dream for far too long.

The answer to this is not to embrace the “wisdom of the crowd“, as folks like Prof. Noakes would have us do, because having legitimate grievances does not amount to having cogent solutions to problems.

But the grievances do need to be addressed. The most obvious and important response is to stop being so complacent. It’s not obvious to everyone, as it might be to me or you, that liberal humanism and constitutional democracy are the answer. These are conclusions rather than axioms, in need of argument and defense today, as much as ever.

So, people need to vote, rather than be apathetic. The polling percentage dropped by around 7% in yesterdays election, and most of those who stayed away were Democrats, who couldn’t imagine it plausible that Trump could win.

Then, the left needs its own populism, as Owen Jones argues in the Guardian today:

Unless the left is rooted in working-class communities – from the diverse boroughs of London to the ex-mill towns of the north, unless it speaks a language that resonates with those it once saw as its natural constituency, shorn of contempt for working-class values or priorities, then it has no political future.

Lastly, it’s politically ill-advised, or even disastrous, to respond to those who vote against the status quo by demonising them as stupid, uninformed or evil.

Yes, many Trump voters may well be sexists, and many Brexit voters might have been xenophobes. When you encounter someone who is a sexist or a xenophobe, I’d hope that you’d call them out on it. But that’s a different matter to making a group judgment, smugly asserting that the idiots are taking over the shop.

It’s not facts that always change people’s minds, as we should know well by now. And, as per the “backfire effect“, simply pointing the facts out might not make that data persuasive in terms of voting behaviour – it can simply entrench existing attitudes. To return to Jones:

Centrism has failed these and many other voters. Clinton was not handpicked by the Democratic party’s elite: she defeated an unexpectedly successful challenge by self-described socialist Bernie Sanders, partly because of his failure to inspire African Americans. But her political machine did make it virtually impossible for other candidates – say, Elizabeth Warren – to stand.

At a time of anti-establishment sentiment sweeping the west, a dynastic establishment candidate – close to Wall Street, close to foreign despots, the backer of calamitous foreign wars – was a disastrous choice.

And every time we sit back and try to make people ashamed of being pissed off for not doing the thing you think they should obviously do, you’re sending the message that their pain and frustration doesn’t matter to you.

When that’s followed up by a political offering that represents more of what they’ve become used to – that promises no hope for change – it shouldn’t be a surprise that they vote for change instead. Even if it’s a change to a Trump or a Theresa May.