Behind Bars: Inside Death-Row In Zambia’s Most Congested Maximum Security Prison 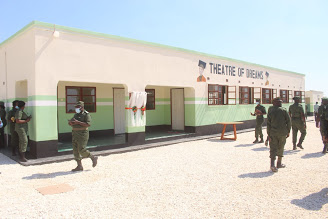 The walls are massive and high, escape is not an option. Once you get in the only way you will get out is if discharged or when you die. Yes, there have been one or two escape attempts, but without any reported success. Mukobeko is the highest correctional facility in Zambia with a maximum security status.

It is located in the central Zambian town of Kabwe. The name ‘Mukobeko’ originates from the local Lenje language and means punishment. It was coined in the 1800s way before the colonial masters set foot in Zambia. Today, Mukobeko Maximum Security Prison holds some of Zambia’s most feared men and women, those who are on death row and life imprisonment.

Behind those huge walls is life – a life that many don’t understand. Stigma against inmates is very common in Zambian society. Recently, I was granted unrestricted access by the Zambia Correctional Service to document the goings in this prison.

The massive prison complex is divided into various sections. One for those serving life sentences, another for those serving dozens of years and yet another area for industries such as carpentry, tailoring and poultry.

The Condemned Section is the most secretive of them, one which is rarely exposed to the outside world. It was once described as “Hell On Earth” by then-Vice President Dr Guy Scott after he toured it a few years ago. Located in the western part of the complex, the Section is home to over 400 men who are waiting to be executed. This is against the initial capacity of less than 48.

Wearing their distinctive white uniforms, death row inmates spend years in this facility waiting for the inevitable. They are the only inmates who know their fate – death. However, since the 1990s, no inmate has been hanged in Zambia as successive Presidents have refused to sign the death warrants.

In this section, congestion is a big problem. Former Deputy Minister of Justice Keith Mukata is one of the men waiting to be executed. In 2018, he was sentenced to death by the Lusaka High Court over the death of a security guard at his law firm.

Mukata, a lawyer by profession, was at the time serving his second term as Chilanga Member of Parliament. His transfer to Mukobeko, to serve his death sentence, triggered a by-election in his constituency which led to Maria Langa being elected as his successor.

“We are pleading with His Excellency the President to consider pardoning some of these men. They are always missing on lists of those being pardoned. There is something that this environment does to someone, we, therefore, ask for a second chance,” said Mukata as his fellow death-row inmates clapped.

Mukata disclosed that in the past two years he has been in prison, he has reflected on his life and is currently studying to become a Pastor so that he can start ministering to his fellow inmates.

Whenever death row inmates have an opportunity to interact with prominent people from outside the prison, they do not waste time to show remorse.

Even when given chance to sing a song, their message is always the same: WE ARE SORRY.

Recently, National Guidance and Religious Affairs Minister Godfridah Sumaili visited the Condemn Section and saw for herself how congested the place is. The Minister couldn’t hide her feelings.

“I have seen for myself the challenges you have. I will report to my superior so that we can see how we can help you,” said Reverend Sumaili.

Sleeping here is a challenge. They are forced to sleep in turns as space is limited. They crowd in these small rooms like sardines.

This is why prison authorities are pleading for more pardons to decongest Mukobeko.

There is however a need to relook at Zambia’s penal code with the objective of doing away with the death sentence, especially where the offenders have shown remorse, have been rehabilitated, and could be safely integrated into society.

The death-row convicts at Mukobeko have started an Agriculture and Poultry Project at the prison with initial capital raised from fellow inmates. In 2018, they sought permission from prison authorities to utilize five hectares of idle land for a life-changing project. Today, the project boasts of 5,000 chicken, 30 goats, several acres of eggplants, rape, and onion. Last month the inmates harvested 3,000 heads of cabbage. They also plan to introduce aquaculture in the coming months.

Globally, 107 countries have abolished capital punishment. In Africa, Botswana, Egypt, Equatorial Guinea, Libya, Somalia, South Sudan, Sudan, and Nigeria are examples of countries that still execute people. In 2018, Burkina Faso repealed the death penalty for ordinary crimes, and The Gambia announced a moratorium as a first step toward abolition. Chad abolished capital punishment for all offenses in 2020. This would be a direction that Zambia and other countries in the continent that still have the death penalty in their penal code but with no recent executions can take.