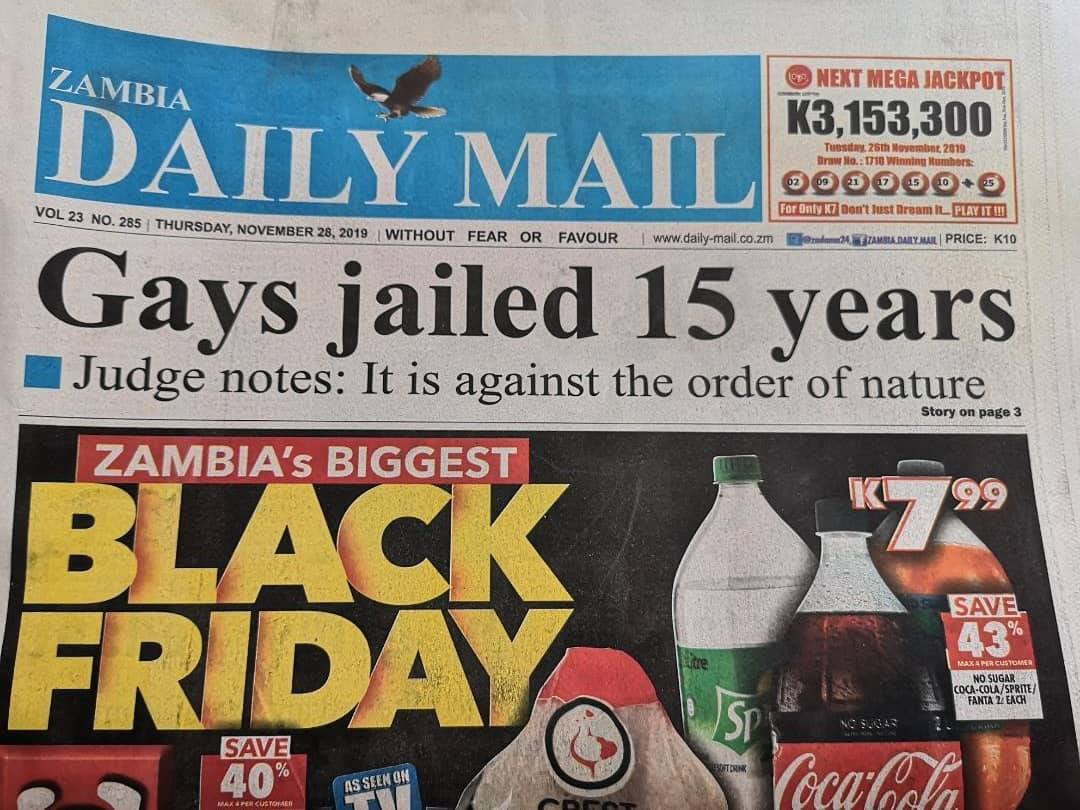 A diplomatic row has broken out between Zambia and the United States following the arrest of Zambian men to 15 years in jail, each for homosexuality. This is the minmum jail term that those convicted of “unnatural acts” can get. The two men, Japhet Chataba and Steven Sambo, both in their 30s are the first Zambians convicted and jailed for homosexuality.

On 25 August 2017, a video of the two men dragging each other at a lodge in the central Zambian town of Kapiri Mposhi went viral on social media, sparking huge debate about homosexuality in this deeply conservative Southern African country.

In the video, Chataba was seen dragging Sambo back into the lodge where they allegedly had sex. The video formed part of the prosecution evidence during trial which was handled by Kapiri Mposhi Resident Magistrate Ackson Mumba who later convicted the two on August 3, 2018 and committed them to the Kabwe High Court for sentencing.

The sentencing has attracted a strongly worded statement by the United States Ambassador to Zambia, Daniel Foote who brought in various issues to the debate.

“I was personally horrified to read yesterday about the sentencing of two men, who had a consensual relationship, which hurt absolutely no one, to 15 YEARS imprisonment for “crimes against the order of nature. Meanwhile, government officials can steal millions of public dollars without prosecution, political cadres can beat innocent citizens for expressing their opinions with no consequences, or poachers/traffickers can kill numerous elephants, barbarically chainsaw and sell their tusks, and face a maximum of only five years imprisonment in Zambia,” said Ambassador Foote.

“Decisions like this oppressive sentencing do untold damage to Zambia’s international reputation by demonstrating that human rights in Zambia is not a universal guarantee. They perpetuate persecution against disenfranchised groups and minorities, such as people from other tribes or political affiliations, albinos, the disabled, our lesbian, gay, bisexual, transgender, and intersex (LGBTI) brothers and sisters, and anyone who is deemed “different.”

This statement led to a sharp reaction from Zambia’s chief diplomat.

“The Government of the Republic of Zambia takes great exception to the remarks made by the Ambassador on the decision by the High Court as well as his comparison of the homosexuality case to other cases of alleged thefts by government officials, political violence and poaching. The Ambassador may wish to note that all cases that are brought before the courts of law are adjudicated based on the available evidence.  It is extremely unfair and highly misleading to suggest that such cases are never brought before the courts of law,” said Zambia’s Foreign Affairs Minister Joseph Malanji.

Malanji added that Zambia is a signatory to major international and regional treaties protecting human rights. At a press briefing in Lusaka, Foreign Affairs Minister disclosed that he phoned the American envoy to express Zambia’s disappointment with his reaction to a matter he considers domestic.

Menwhile, Zambia’s President Edgar Lungu has told Sky News that his country will not be bullied into adopting what he termed “foreign practices.” He added: “we cannot allow homosexuality in Zambia. We cannot be forced to allow men to marry men because even animals do not do so.”

One of Zambia’s prominent diplomats Emmanuel Mwamba has also observed that Ambassador Foote’s statement is in contrast with US President Donald Trump’s policy push that revises pro-LGBTQ rights and protection aggressively promoted by his predecessor Barack Obama.

Mwamba, a journalist who is currently serving as Zambia’s Ambassador to Ethiopia and the African Union, says President Trump promotes pro-family policies.

“The Trump administration has withdrawn special privileges fronted as “rights” granted to the LGBTQ community by the Obama administration in; healthcare, employment, housing, education, commerce, the military, and prisons. President Trump also issued an Executive Order to create obstacles for people seeking to enter the U.S. on the basis of LGBTQ alleged discrimination or harassment from conservative countries that ban or do not recognize these LGBTQ rights. The administration has also cut spending to the President’s Emergency Plan For AIDS Relief (PEPFAR) for programs related to abortions and LGBTQ,” wrote Ambassador Mwamba in his opinion piece published by Mwebantu, an online news outlet.

Perhaps due to the sensitivity of the same sex issue in the country, Zambia’s LGBTQ organisations have not commented openly on the sentence for fear of the reprisals.