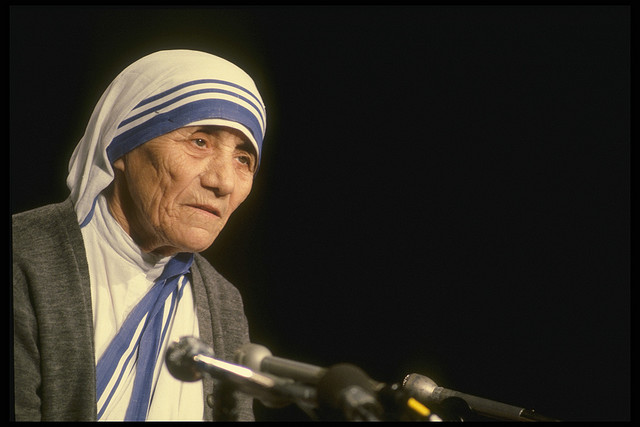 Nobody should be surprised to hear that I’m an atheist (or an agnostic, depending on who I’m talking to). But for many a year now, I’ve deplored the lack of humanism displayed by many of my fellow atheists, expressed in a contempt for religion and the religious.

There’s no question in my mind that religion is not the ideal way to substantiate moral claims, or to create community, and especially not to resolve matters of empirical fact. Despite this, most religious people are just like the rest of us in wanting to live better lives and treat each other well, and much of the time, their religion is no obstacle – and even an advantage – in the quest to do so.

So yesterday, when Mother Teresa’s (MT) elevation to sainthood offered an opportunity for a brief religious war to flare up on social media, my only contribution was to point out that legitimate doubts could be raised regarding whether her sainthood was merited on purely technical grounds, and that one could entertain these doubts without casting aspersions on her character or on the characters of Catholics who revere her.

Christopher Hitchens famously described her as a friend of poverty, rather than of the poor, in a typically thunderous demolition job on the impression many have of her saintly character. Unfortunately, the aggression manifested in Hitchens’ writing on this creates an opportunity for MT’s supporters to perhaps regard her as victim of persecution, and allows for thinking that his criticisms are perhaps exaggerated or unwarranted.

Hitchens is not the only person one can read on these matters, though.

Mick Brown wrote a lengthy and detailed piece in 2003, making the case that her most famous ‘miracle’ seems to actually be utterly non-miraculous. Dr. Aroup Chatterjee has spent decades investigating and exposing the unhygienic and demeaning conditions that prevailed in homes run by MT’s organisation, the Missionaries of Charity, describing that organisation as a “cult of suffering”.

Scholars from the University of Ottowa concluded the same in a 2003 study, noting that

doctors visiting many of the 517 “homes for the dying” run by Mother Teresa observed unhygienic conditions and a shortage of actual care, food and painkillers. Lack of funds were no explanation, since Mother Teresa’s order of the Missionaries of Charity had raised hundreds of millions in aid money. When the nun herself was in need of medical treatment, “she received it in a modern American hospital,” they point out.

According to Larivée and colleagues, Mother Teresa’s image of altruism is a myth.

Helmley Gonzales, a volunteer worker for the Missionaries of Charity,

says he was appalled at the poor level of hygiene and medical care he saw there. He says the organization didn’t vet him or the other volunteers. None, including himself, had any medical experience or received any training before working at the hospice.

He claims he saw nuns routinely reuse needles after washing them in tap water, that clothes — sometimes soiled with urine and feces — and cooking utensils were hand washed side by side in the same room.

In short, it’s not clear to me why Catholics themselves would want to venerate Mother Teresa, or have her immortalised as a “saint”, both because of how she treated the poor, as well as because of how her beatification was fast-tracked, offered little opportunity for opposing voices to be heard, and also rests on dubious “miracles”.

One can say this without engaging in mockery of the concepts of “miracles” and “saints”, and I think it’s important to do so, because most people who believe in those things might be able to agree with us that MT is problematic, if we just stopped belittling them.

The Mother Teresa of popular imagination was a creation of Malcolm Muggeridge and the Catholic Church. A concern for the global South’s poor might require recognising that, also, and wondering whether there are better candidates for sainthood than “the quintessential image of the white woman in the colonies, working to save the dark bodies from their own temptations and failures.”