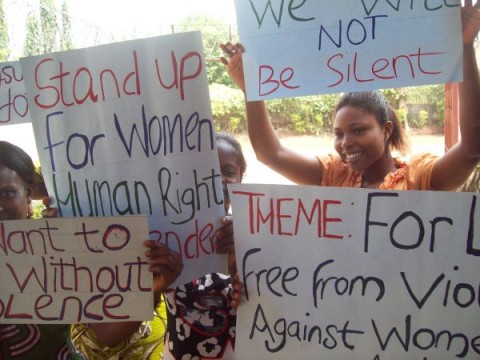 Cases of gender based violence (GBV) have reached alarming levels in Zambia to an extent where school-going girls are now being taught not to allow their older brothers or fathers to touch them.

GBV is so common that the media in the country has now made it one of the stories being given prominence in the news. This situation has led to activists, government and interested parties funding prevention programs and erecting huge billboards to try and fight the vice.

Defilement, which forms part of GBV, is the most prominent in the news. A recently released annual survey by the Zambia Police Service has revealed that in the year 2015, the country recorded 18,088 defilement cases which resulted in a 16.2% increase as compared with 15,153 cases the previous year.

These figures keep rising despite massive radio, TV and newspaper sensitization and the rural programs the women’s movement is currently implementing. According to the Police report, other forms of GBV, aside of defilement, have also seen a rise in cases reported.

However, these figures are only a fraction on what actually happens countrywide. Most GBV cases in the rural areas are not reported to the authorities due to fear of reprisals from the community or due to cultural practices. According to some activists, men who defile girls as young as two or three years do so due to some false health beliefs. “Some men believe that when they have HIV/AIDS and sleep with a child, they get cured of the disease, this is the reason you see men defiling children as young as two months,” said an activist who spoke on condition of anonymity.

As a way of fighting the cultural part of the GBV cases, traditional leaders have been incorporated to try and discourage their subjects from marrying off under age girls. In August last year, Zambia joined the ‘HeForShe’ campaign, an international campaign to fight GBV which has so far incorporated chiefs and civic leaders to spearhead the fight against abuse of girls and boys. So far, the campaign has been introduced in most rural parts of the country with bicycles being distributed to those at the core of its implementation.

Recently, Zambia’s Gender Minister Nkandu Luo, while addressing chiefs in the north of the country, disclosed that one-stop-centers had been set up in several communities where GBV cases can be reported and dealt with. Professor Luo said: “The centers will also be furnished and computers will be bought to allow for easy tracking of cases. We know that more needs to be done but for a start, we thought of establishing the offices first.”

One of traditional leaders who has taken the fight against GBV personal, is Senior Chief Nkula of the majority Bemba speaking people. At the entrance to his palace in the town of Chinsali, are inscriptions in the local Bemba language warning his subjects against marrying off their school-going children. Inside his palace, the chief has decorated his sitting room with several certificates he has been awarded for standing up to the rights of girls.