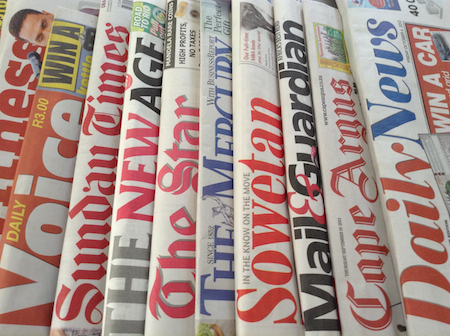 Fridays are the day when – if I happen to walk into a store that sells newspapers – I’ll often cast a wistful gaze at the stack of Mail & Guardian (M&G) papers delivered that morning, noting that my primary impulse would sooner be to straighten the stack rather than to buy a copy.

This isn’t because if you wait until Monday, the content becomes free to read online. It’s because I’ve lost my confidence in the odds of reading something worthwhile, that was so strong in the late 80’s (for its predecessor, the Weekly Mail), and continued for much of the time since then.

I’ve lost the faith, in a sense, seeing as our relationships with what we read and listen to can often be far deeper than a simple producer/consumer transaction.

And it’s not only the M&G. The Independent Group exists, at least in discernible part, to glorifying its owner, and in the form of the Cape Times for demonising the University of Cape Town.

The Daily Maverick, for whom I have great affection, is so committed to facilitating debate by publishing every point of view that they frequently publish things that don’t seem to be points of view at all, but rather ideology-blinkered screeds or stream of consciousness effluvia.

And then there are outlets like The Daily Vox, which starts from the (sound) premise that the voices of regular folk are under-appreciated and too seldom heard, but seems to forget that sometimes voices aren’t worth hearing thanks to their incoherence, or because they have nothing interesting to say.

Yes, it’s easy to criticise from the sidelines. And yes, newspapers are competing with short attention-spans, and the seductive click-bait of Buzzfeed, Vox, Salon and so forth. Plus, because there’s so much good international content online, it’s really only local news that can keep people coming back to local publications.

Nevertheless, we can do better in some instances, and I want to highlight two recent cases that either illustrate an editorial failure, or that my standards are woefully out of touch with reality.

First, an editorial that was carried in the Daily Vox recently, titled “This is how BDS-SA responded when we offered them the chance to reply to their critics”. So, at least the headline isn’t obvious click-bait.

What the piece is, though, is an example of entirely self-serving and sensationalistic airing of private correspondence, in order to say nasty things about someone.

And, the headline is also false. A representative of BDS-SA wrote some very poorly-judged emails to his colleagues, and copied the Daily Vox in, but nowhere in the correspondence does he issue a BDS response – it’s him expressing his views, rather than expressing the views of the organisation he represents.

Second, in asking to be dropped from the correspondence, as one of the Daily Vox people does, they are signalling an awareness of this – in other words, that these are things they presumably shouldn’t be seeing. It’s odd, then, to publish them later.

The Daily Vox say that “by replying to us directly, his smug retort was now in the public domain”, which seems an odd interpretation of public domain to me, but rather just a veneer of justification for a gossipy hit-piece.

They say it’s precisely not gossip, but rather that

It’s an example of how Farid Esack responds to a particular news medium, yes. Maybe he’s a complete ass, maybe he’s paranoid as all hell, maybe whatever. Maybe it’s true that he thought this was a poor time, or too short notice, to ask BDS-SA for comment (as the Daily Vox did), and he over-reacted to that.

Or, maybe dressing up emails not intended for publication as official BDS-SA positions is simply an excuse to reinforce a narrative of brave David, taking on Goliath:

But we will not be intimidated by people who think they are gatekeepers of Palestinian solidarity in South Africa, or otherwise. And we will continue challenging power, in all its manifestations, for as long as we are around.

Then, the M&G, fresh from the Mmusi Maimane-related embarrassment, where they published and stood by an amateurishly concocted story for a few weeks before finally apologising.

False balance is a problem in its own right, but a worse problem is when a publication that aspires to be serious quotes “researchers” of the calibre of Anthony Brink, who had this to say about Zackie Achmat: 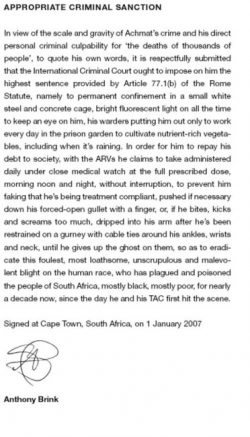 The M&G piece was later deleted, along with all the tweets linking to it. I don’t think it should ever have been published – not by the M&G, and not by the Sowetan, or News24, or anyone else who carried it.

This is not because I desire censorship, but because it tells us nothing we don’t already know, and because it lends credence to HIV Aids denialism, being a mere recitation of their views rather than an interrogation of them.

So, it’s not that the M&G should be singled out for publishing it – I think everyone erred there. The M&G’s unique error is in deleting it after they recognised that error, as if it might disappear from our memories.

It probably will, and most likely, many people never even noticed. But accountability, and building a brand of repute, means owning up to error, not pretending it didn’t happen. Once you’ve made that sort of mistake, you have the option of leaving it there, with a covering note or an accompanying critique.

It’s certainly not to your credit that you, as editor, attribute the fault to it being wire copy, published by a “junior”.

@pierredevos (it was a news24 wire story put up by a junior in the morning.)

The fact that newspapers are forced to use wire copy is because they can’t be everywhere, and cover every story. It’s a recognition of limitations, and an explanation rather than an excuse. And, as much as newsrooms might need to be staffed by juniors, the responsibility for error is not theirs.

But to end on a positive note, read this story in the M&G’s health section, Bhekisisa, which argues that we should snub Mbeki and his HIV and Aids denialism, just as he snubbed Nkosi Johnson, who died of Aids while Mbeki was stalling on drugs that could have saved him.

Yes, we should snub Mbeki, just as we should snub those who encouraged his views, like Anthony Brink. The M&G should follow its own advice, and own up to their errors when they don’t.