Home » Coronavirus » Tribute: What did Magufuli do?

Tribute: What did Magufuli do? 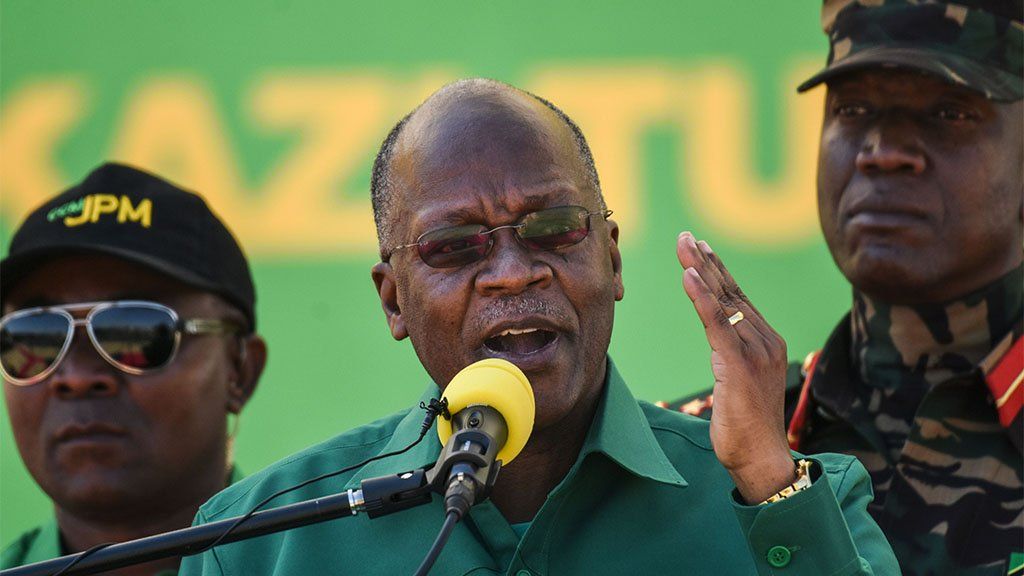 Tanzania’s former President John Pombe Magufuli last week became the first leader of the East African country to die while in office. He was barely five months into his second five-year term. The announcement of his demise was made by then Vice President Samia Suluhu Hassan. “Mama Samia,” as she is popularly known, has already been sworn in as president and will serve till 2025.

Magufuli’s legacy is a conflicting one. In his own country, he is considered a hero by many. Out here, there seems to be a mixed verdict. His reform agenda seems to be in collision with his human rights record. As plans of laying the fallen president to rest get in top gear this week, perhaps it’s time to reflect on what would define his memory long after today.

Magufuli was a trained chemist (held a PhD from the University of Dar es Salaam) and served as a mathematics and chemistry teacher in the early years of his professional life. He joined politics in 1995 when he was elected as a member of parliament. He would proceed to serve as Deputy Minister in different portfolios before earning himself full ministerial portfolios.

It is while at the works ministry that he earned himself the “bulldozer” nickname for his determination for clearing anything that stood in the path of delivering major infrastructural projects for Tanzania during his tenure at the ministry.

Fight on corruption and wastage

Magufuli’s popularity at the time won him the Chama Cha Mapinduzi (CCM) presidential candidature against party insiders who felt they were most suited to succeed President Jakaya Kikwete. He ran as an agent of change, promising to dismantle corruption cartels in various sectors of government.

True to his words, just a day after being sworn in, he embarked on a mission to rid the country of thousands of “ghost workers.” He often showed up at various government agencies, asking employees to justify their jobs. Sometimes he fired public officials on live television.

Immediately after taking office, he imposed measures to curb government spending, such as barring unnecessary foreign travel by government officials. He dropped the government’s sponsorship of a World AIDS Day exhibition in favour of purchasing AIDS medication. He discouraged lavish events and parties by public institutions. Magufuli also reduced his own salary from USD15,000 to USD4,000.

During the same year, he suspended celebrations of the country’s independence day in favour of a national cleanup campaign to help reduce the spread of cholera. He personally participated in the cleanup efforts, having stated that it was “so shameful that we are spending huge amounts of money to celebrate 54 years of independence when our people are dying of cholera”. The cost savings were to be invested in improving hospitals and sanitation in the country.

These radical moves were quite the opposite of what citizens of most African states were accustomed to. Corruption, wastage of public funds and lavish-lifestyles of senior government leaders was the order of the day across the continent. Magufuli instantly rose to become the continent’s ‘darling president.’ The hashtag #WhatWouldMagufuliDo was not only used across Africa to highlight the changes that were happening in the East African country but also to challenge their own leader to emulate Magufuli’s approach to leadership. (The hashtag was a corruption of the phrase “What would Jesus do?”, often abbreviated to WWJD, which became popular with adherents of the Christian faith in the late 1800s after the widely read book by Charles Sheldon entitled, “In His Steps: What Would Jesus Do”).

During his first term in office, Magufili embarked on an ambitious infrastructural development program with the aim of spurring the growth of Tanzania’s economy. These project included the construction of a modern terminal at the Julius Nyerere International Airport in Dar es Salaam, construction of Tanzania standard Gauge Railway, Julius Nyerere Hydropower Station and several road network projects, bus terminals, bridges and much more.

Under Magufuli the country ordered a new fleet of aeroplanes to revive Air Tanzania which collapsed with the fall of the East Africa Community in the late 70s.

Putting his country’s interest forward, Tanzania amended the laws governing the award of mining contracts, giving itself the right to renegotiate or terminate them in the event of proven fraud.

The new legislation also removed the right of mining companies to resort to international arbitration. The country has deposits of gold, diamonds, gemstones (such as rubies, aquamarine, tanzanite and sapphire), Iron and Base metals (nickel and cobalt), platinum and coal resources.

Economically, Magufuli is has left Tanzania in good shape. Despite the Covid-19 pandemic, Tanzania is one of the few countries across the world that posted a positive economic growth rate in 2020. Tanzania also achieved middle-income status five years ahead of schedule. The huge infrastructural investments will ensure that the country continues on this growth trajectory.

A fall from grace

Despite the changes he was putting in place at home, Magufuli’s reputation was quickly starting to fall in the global sphere. For someone who many people thought was a progressive African leader, and one with a background in teaching, Magufuli’s stance on teenage pregnancies came as a shocker. Not just to the players in the education sector and human rights organizations, but to the world at large.

No one with a child from Class One to secondary school will be allowed back to school. If they chose to rear children, let them stick to that.

What shocked many was his directive on schoolgirls who get pregnant. He banned schools from readmitting girls who had become pregnant in the course of their education drawing condemnation from human rights bodies and international media.

The international community viewed Magufuli’s stand on the issue as retrogressive and an infringement on the girls’ rights to education.

Tanzania has become increasingly authoritarian since John Magufuli’s election as president in 2015. None of the 180 countries ranked in RSF’s World Press Freedom Index has suffered such a precipitous decline in recent years.

Local media in Tanzania have been subjected to harassment and censorship during Magufuli’s reign. Arbitrary arrests and detention of journalists, suspension of licenses and hefty fines imposed on media owners to curtail freedom of expression was the order of the day in Tanzania.

In the first five years of his presidency, Tanzania fell a record 56 places in the World Press Freedom Index published by RSF. Newspapers such as The Citizen, Mwananchi, and Tanzania Daima have borne the brunt of his administration’s upfront on a free press.

Erick Kabendera, an investigative reporter, paid a high price for his articles criticizing the economy, the government and corruption, spending a total of seven months in prison following his arrest in July 2019.

His authoritarianism was also seen in how his administration handled opposition politicians and civil rights groups. Magufuli was intolerant to criticism of himself and his policies. Opposition politicians like Freeman Mbowe and Zitto Kabwe were on numerous occasions arrested for voicing opinions critical of the government and the ruling CCM party.

Tundu Lissu of CHADEMA who ran against Magufuli in the 2020 presidential election was also a regular ‘guest of the state’ during his first term in office. In 2017, he sustained multiple gunshot wounds that would see him airlifted to neighbouring Kenya for treatment before going into exile in Belgium.

He returned in 2020 to contest for the country’s presidency before going back into exile as the government began another crackdown on opposition politicians following claims that the government rigged the August poll.

Even before the polls, Magufuli had again hit international headlines for rejecting scientific evidence of the coronavirus pandemic, urging his citizens to raise their voices in prayer rather than cover their faces with masks.

He promoted Covid-19 misinformation and misinformation related to vaccination during the pandemic in Tanzania. He refused to close down churches (and other places of worship), stating: “That’s where there is true healing. Corona is the devil and it cannot survive in the body of Jesus.”

In May 2020, he announced that the disease had been defeated by national prayer, and called for a public celebration.

Magufuli would later change his stance on the pandemic in 2021 as senior government officials including a former Vice President of the semi-autonomous archipelago of Zanzibar succumbed to the virus.

Influential religious organizations also played a role in his change of heart. Earlier in February, the Catholic Church in Tanzania urged people to take Covid-19 precautions more seriously, saying 60 nuns and 25 priests “had died in the last two months” after showing symptoms of coronavirus.

The last few weeks before his death saw a lot of speculations on social media about the president’s health – with rumours going around that he had contacted the virus and was critically ill. The government at the time denied rumours of the president’s ill health.

Opposition leader Tundu Lissu claimed on social media that he had reliable information that the president had been flown into Kenya for treatment. Similar claims were also made by Kenya’s Daily Nation who said Magufuli was flown into the country and went through medical procedures to aid his breathing before being secretly flown back into Tanzania when his condition did not get any better.

Even though the president is said to have died of heart complications, opposition leaders in the country insist that Magufuli died of Covid-19. Throughout the pandemic, Magufuli was always seen attending public gatherings and not on a single occasion was he ever seen wearing a face mask.

Perhaps one of the most forward-looking decisions Magufuli made was to pick a Muslim woman as his Vice President. This makes Tanzania the first country in Sub-Saharan Africa to ascend to the presidency. The seamless transition is evidence that democratic culture is not entirely lost in Tanzania.

Mama Samia now has an opportunity to build a legacy of her own. Many are hoping that she will follow in the footsteps of her predecessor in fighting corruption and public wastage. That she will continue investing in sectors that will secure the country’s position as a middle-income economy. We can also pray that she will roll-back on some of Magufuli’s counter-productive policies by for instance allowing all girls access to education. We hope that she will respect the media and be open to criticism by opposition politicians.

The former president will be laid to rest on Thursday, 25th March 2021. When it comes to the question of whether Magufuli was a good or bad leader, the jury is still out.