Home » Multimedia » Politics During A Pandemic: How President Uhuru Kenyatta Is Clipping His Deputy’s Wings

Politics During A Pandemic: How President Uhuru Kenyatta Is Clipping His Deputy’s Wings

In the first article that we published this year, we made predictions about political developments that were likely to carry the headlines in the continent in 2020. Nowhere in our prediction did we talk about the COVID-19 virus that was at the time causing havoc in parts of China, but unknown to most of the world. A lot of those predictions have greatly been impacted by this virus, and some might end up being delayed or even overtaken by other developments ultimately. This though will not be the case for our prediction on Kenya.

For a country that sort of gets into a fresh campaign mode as soon as results for one election are announced, to expect that a pandemic would stop politics would be to underestimate Kenyan politicians. In the January article, we had predicted that the rift between President Uhuru Kenyatta and his deputy William Ruto might grow even wider. This is coming to pass as the president has recently launched an onslaught on his number two.

The newspaper headlines have in the recent past focussed on the rifts in the ruling party, even as COVID-19 infections continue to rise, almost hitting a new record every day. On Monday (25th May 2020), Kenya reported 72 new cases of the novel coronavirus, but the top spots on newspaper front pages were reserved for politics as usual. 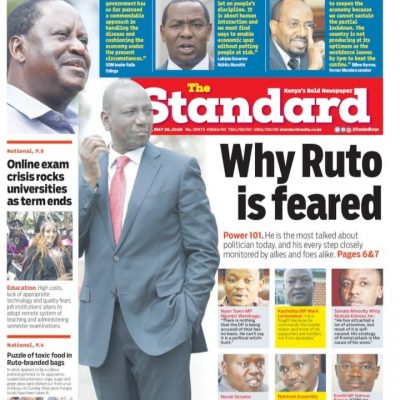 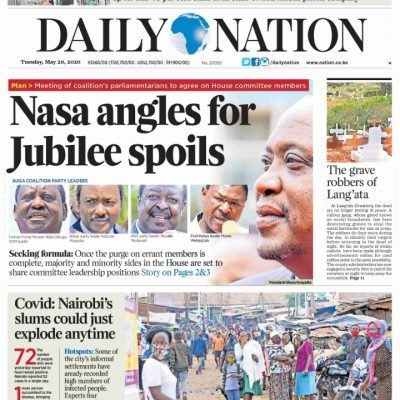 These headlines that have become common even as COVID-19 continues to infect more Kenyans are as a result of a purge directed towards members of parliament perceived to be allied to the Deputy President (DP). In the past week, the president moved to flex his muscles through a parliamentary group meeting of the ruling Jubilee party which resolved to remove from office the Deputy Speaker of Senate, Majority Leader, and Majority Whip at the Senate. The party is also expected to remove members allied to Mr. Ruto from various house committees. Another parliamentary group meeting of the ruling party is expected next week to ratify similar decisions for the national assembly.

The president and his deputy have been at cross-roads since the president decided to work closely with his main challenger in the 2017 presidential elections, Raila Odinga. Even though the two have never openly attacked each other, politicians aligned to the two camps have openly torn into each other, at times in the presence of their leaders.

The ruling party’s Secretary-General Raphael Tuju says the measures being taken by the party are aimed at instilling discipline in the ruling party.

We cannot continue to have party members showing indiscipline to the extent of opposing the president and our party leader.

The meeting that was held two weeks ago at State House, Nairobi which resolved to oust some members from their senate leadership was snubbed by the Deputy President despite being the deputy party leader of Jubilee. Senators allied to him were also a ‘no-show.’ The party has since threatened some of the members who failed to show up for the meeting with disciplinary action which includes revoking nominations for the case of nominated senators, and de-whipping of senators from various senate committees which in effect means the affected legislators will lose a substantial amount of earnings from committee sittings. These threats saw many of the members changing camps to pledge their allegiance to the party leader.

During the first term of President Uhuru’s administration, the president and his deputy ran the country as co-principals. Then, the country was being governed by a coalition known as the ‘Jubilee coalition.’ The president was the party leader for The National Alliance Party of Kenya (TNA) and his deputy was the party leader for United Republican Party (URP). There was not a single time when the two or politicians from their camps clashed. Often the two leaders showed up at public events wearing matching outfits, and at times even held hands like bosom buddies in public. Their friendship and public display of it was fodder for the press for months.

In October 2014, the president surprised the country when he temporarily handed over executive power to his deputy so that he could attend hearings for a criminal case against him at the International Criminal Court in The Hague. The transfer of power was achieved with high theatre, with Mr. Kenyatta arriving at Parliament to a Guard of Honor and the National Anthem and leaving his office at Harambee House without the usual ceremony of a presidential escort.

The decree signed by Mr Kenyatta handing over to Mr Ruto was unprecedented in the country and his willingness to forego, for a while, the public ceremonies of power, was quite unusual.

He said he was temporarily surrendering power because of his determination to end his case at The Hague without dragging the “sovereignty of Kenya (or) 40 million Kenyans” with him in the crimes against humanity charges which stemmed from the 2007/8 post-election violence.

In the runup to the hotly contested 2017 presidential elections, the two parties were wounded up to form the Jubilee Party of Kenya which had Kenyatta as party leader and Ruto as deputy party leader. This merger would later prove costly to the Deputy President as a new political relationship started to blossom between the president and his former challenger Raila Odinga, with whom he had signed a new secretive deal that ended hostilities that were threatening to take the country back to a path of violence.

This new union created a rift within the ruling coalition with the majority of the Jubilee Party legislators moving to the Deputy President’s camp. They would use church pulpits, funerals, and other public forums to launch attacks on the union between the President and Mr. Odinga. At the onset, the attacks purely targetted Mr. Odinga as a politician who cannot be trusted. They claimed that he was scheming to tear down Jubilee Party as he did to the former ruling party when his National Development Party (NDP) merged with former President Daniel Moi’s Kenya Africa National Union (KANU) in 2002. Odinga would later stir a revolt in the party that led to a walkout with members who were hitherto seen as die-hard KANU figures. KANU lost the election that year to the opposition coalition.

Perhaps you are asking, why can’t he then just fire his deputy?

According to the Kenyan constitution, a president cannot fire his deputy. They run and are elected into office on the same ticket. The only grounds for removal of a deputy president from office is impeachment which has to be based on proof of gross misconduct or violation of the constitution. Both of which are very difficult to prove in the case of the current DP. Even if it were possible, it would be a route the president would be reluctant to take because of underlying political connotations.

The president has in fact not openly indicated that he has a problem with his deputy. In action though, the president has allowed his party members and at times even senior government officials including cabinet ministers to attack and at times humiliate the DP without consequences.

While it is not clear if the president agreed to support Mr. Odinga to be his successor, or even if Mr. Odinga himself will be running for president, there has been quite some political realignments that may rightly unsettle the DP. KANU led by Senator Gideon Moi (son to former president Daniel Moi) has entered into a post-election agreement with Jubilee party in a decision that was seemingly made without the involvement of the deputy party leader. In fact, the senate seat of Majority Leader that was taken away from a senator allied to the DP was awarded to a KANU senator. Mr. Ruto and Moi both come from the rift valley region, and even before the current woes, they were involved in a regional supremacy battle of their own.

Following the March 8th, 2018 deal with Kenyatta, Mr. Odinga made visits to the retired president’s home, ostensibly to seek his support in crafting a political coalition. While Mr. Odinga’s Orange Democratic Movement (ODM) is highly unlikely to get into a post-election agreement with Jubilee Party for reasons of their own, their partners in the coalition they ran for the last elections with are lining up for post-election coalition agreements with the ruling party. ODM members have also voted on many occasions with their Jubilee counterparts in parliament and avoided public criticisms of Mr. Kenyatta’s administration.

While the coalitions effectively clip the wings of a hitherto very powerful Deputy President, a parliament that votes with the ruling party almost to the last man should be one that worries the public. How it will effectively charge it’s duties of being the people’s watchdog, while also protecting them from the excesses of the executive remains something only time will tell.

Dr William Ruto, the current deputy president is the president-elect following Monday’s declaration that he garnered a majority of...

Kenya Decides: Why the world is keenly watching the 2022 presidential poll

On the day of the Kenya elections, August 8th, 2022, I had a chat with veteran South African journalist...

Kenya @59: What Does The Future Hold?

Kenya recently celebrated 59 years of self-rule in an elaborate event which was also the last public holiday being...